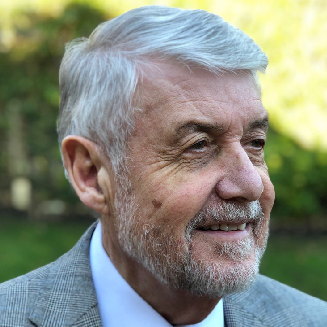 Sir Ken commenced his fire service career in 1966 and served as a fire chief in a number of UK fire and rescue services before becoming London’s Fire Commissioner in 2003.

From 2007 until January 2013, Sir Ken was the UK Government’s Chief Fire and Rescue Adviser for England, advising on fire policy matters and providing advice during major emergencies and planning for the 2012 London Olympics.

Sir Ken has produced a number of organisational reviews including:

Sir Ken also completed a review of the fire and rescue services in Southern Ireland, Bermuda and Gibraltar and the national fire safety and civil defence arrangements in the Kurdish region of Iraq at the request of the Kurdish Regional Government.

Following the fire at Grenfell Tower, London in 2017 in which 71 people tragically lost their lives, Sir Ken was appointed as the Chair of the Independent Expert Advisory Panel

Her Majesty the Queen awarded Sir Ken the Queen’s Fire Service Medal in 1991 and the CBE in 2001. Sir Ken was knighted in the Queen’s Birthday Honours in 2006 in recognition of his outstanding contribution to the fire and rescue service.

All sessions by Sir Ken Knight

26 Sep 2019
17:15 - 17:30
Theatre
This website uses cookies to improve your experience. We'll assume you're ok with this, but you can opt-out if you wish. Accept Reject Read More
Options

This website uses cookies to improve your experience while you navigate through the website. Out of these, the cookies that are categorized as necessary are stored on your browser as they are essential for the working of basic functionalities of the website. We also use third-party cookies that help us analyze and understand how you use this website. These cookies will be stored in your browser only with your consent. You also have the option to opt-out of these cookies. But opting out of some of these cookies may affect your browsing experience.
Necessary Always Enabled
Necessary cookies are absolutely essential for the website to function properly. This category only includes cookies that ensures basic functionalities and security features of the website. These cookies do not store any personal information.
Non-necessary
Any cookies that may not be particularly necessary for the website to function and is used specifically to collect user personal data via analytics, ads, other embedded contents are termed as non-necessary cookies. It is mandatory to procure user consent prior to running these cookies on your website.
SAVE & ACCEPT